Choir studio Zvoneček – Prague (Prague Little-bell) is part of the High school and Music Schools of the capital city Prague. It was founded in 1996 and over the years it gained an important place among the top Czech choral ensembles. In the preparatory departments (Zvonítka, Zvonečky) the studio works with children from four to twelve years, the best of whom can apply for a place in the concert choir Zvonky.  In 2005, the oldest members from the concert choir formed an independent chamber choir “Abbellimento” – musical ornament in english.  The repertoire of each choir is chosen with the age of the singers in mind, however the choir strives for maximum richness and variety of musical styles. The youngest singers start with one voice songs, while the more experienced singers eventually sing more complex music, including spiritual pieces with organ accompaniment. The concert and chamber choir sings not only classical, time-honored music, but also multi-voiced works by contemporary composers. In addition to piano and organ accompaniments, we also use other instruments: flute, violin, cello, clarinet, drums, etc.

Over the years, the choir studio has gained fame at home and abroad (many awards at national and international competitions and festivals, including Slovakia, Italy, France, Belgium, England, Poland, Germany, Austria, USA, Canada, Japan, China). In addition to foreign tours, the performances of the choir Zvoneček – Prague have been hosted by partner choirs from France, USA, Sweden, England, Germany, Lithuania and Japan. The studio has so far recorded and released ten CDs and collaborated on a number of projects (theatrical performances, concerts for state-TV, participation in the TV NOVA series Gympl, etc.). 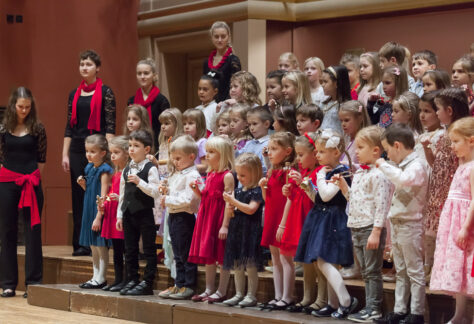